The 1/8-mile drag strip opened in 1962 on a 35-acre site along Petersburg Road. The track got its start when local youth went to H. Robert Davis, a prominent local doctor and community leader, asking for his help in building a place to race to keep them off the streets. In 1958, the Quarter Aces Car Club came up with the cash for a down payment on the land that would become the drag strip. It took another four years for the construction to be complete, allowing racers to test their cars against each other for the price of 75 cents, according to Mr. Larry Basich one of the original young members who also lives next to the Track.

The track was sold to Ron Wallace and Ed Stambaugh in 1971, and the name was changed to South Mountain Dragway. The pair owned the track for the next three-plus decades. During that time, the track became affiliated with the National Hot Road Association (NHRA), began working with Carlisle Events and added a number of updates to the facility.

Mr. Stan Dye a local businessman took over the track in 2007, and changed the name to Quarter Aces Drag-O-Way. He operated the Track until it closed in August of 2013.

In January of 2014 the Track went up for sale. On January 18th Mr. Natoli along with his Partner Debbie visited the Track with a couple of close friends High School Auto Shop class mate Mr. Anthony Tumbarello and Long Island Track operator and friend Mr. Walter Frye. We met with the Jones the former track managers and the Local realtor Mr. Dan Alderman. The realtor Mr. Dan Alderman spoke of the history and tradition of the track is a factor in that interest, but Alderman said the track also represents an opportunity for someone to step into a turnkey business operation. “That track was very well-known,” he said. “They know that there’s a good business there. They’re anxious to open it up again this coming season.” Township supervisors would like to see that happen. “In this area, it’s really part of our heritage. We’re really car-centric,” Gembusia said. The track is sited in the township’s woodland conservation district, which was created to preserve open space and other scenic and natural resources. A commercial use is generally not permitted in that district, but the strip is allowed to operate because it opened before the zoning laws were adopted. Gembusia said the new buyer could do whatever they wanted at the site, but it was in the township’s best interest to leave it as a drag strip. The strip is “much safer and in the right environment” for people interested in drag racing. “You’re buying those old muscle cars, and you want to try them out. This is a safe environment to do it,” he said. That’s one of the reasons Carlisle Events has worked with the dragway for its Carlisle Ford Nationals, Carlisle GM Nationals and Carlisle Chrysler Nationals events. “Our showgoers and participants had a place to go, weather permitting, on a Friday afternoon and early evening to either see what their car could do in a safe and controlled environment or, if not racing, watch as cars from the show field at Carlisle and other drag cars took passes down the track,” said Carlisle Events spokesman Michael Garland. “Call it a trip down memory lane or a way to get the lead out, the Friday racing program during our summer events was always a fun one.” Garland said the track also gave show guests additional entertainment options, and kept them local. “Hopefully, things work out, and racing can continue to be a regular part of the calendar year for those who are passionate about it,” Garland said.

Along came Mr. Mike Natoli a Fleet Supervisor and Automotive/Diesel Instructor from Long Island NY who and his Girlfriend Debbie had just sold their homes and were looking for a small house with a BIG garage to retire to in PA for their three dogs and Racecar. Mr. Natoli asked if the Jones could put a meeting together and met with what was left of the racers and RFC Chaplain Mr. Brian Kuhn & his wife Laurie, to seek what they liked most about the track and what they did not like. First they told him about that the Track the Staging lanes and the pit road was filled with crushed slate that would give racers flat tires which drove away most of the regular racers. Mr. Natoli heard a whole bunch more but wanted to know what made this place special to them I why it should be saved. They brought along Mr. Larry Baish one of the original Quarter Aces Members who helped to build the Track in 1958. They told me that it was like family. Mr. Natoli new that this track had deep roots and was set on planting his own and starting his tenure to rebuild, clean out the weeds and bring it back to what he heard from the group. 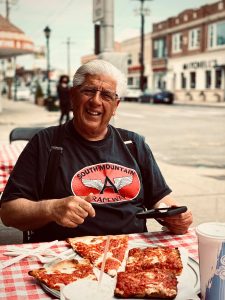 Mr. Natoli told the Group that he had a Five year plan and would not take any profits and put back into the Track to bring it back from the ashes. Mr. Natoli’s heart runs fast and true. Mr. Natoli made an offer and after 6 long months negotiated the purchase on June 24, 2014 On June 25 & 26th paved the Staging lanes, 27 & 28th the word got out that this guy from NY bought the track and needed help getting it cleaned up. People came from everywhere over 80 volunteers came out to put up gates, mow, paint replank the bleaches, fill three 20 yard dumpsters of garbage for the next 2 weekends. The Track was supposed to be a turn key operation but had been stripped clean not even a thumb tack. Mr. Natoli contracted with Mr. Tom Hagin to replace the missing Timing system crucial to a NHRA sanctioned track. So on July 3rd the plan was to install the Timing system and run it’s first race a “SOFT OPENING” on Friday July 11th. Mr. Natoli wished Mr. Hagin a Happy 4th of July weekend and would see him on Tuesday to begin the installation of the timing system. Mr. Hagin lasts words was you never can tell. Mr. Hagin had a Massive Heart attack and went to be with the Lord on July 4th. The Friday race was cancelled and Mr. Natoli said,” were going to do it like 1962 stop watches and flaggers. South Mountain raced on Sunday July 13th and had 31 cars entered running each other and having the times of their lives and the track lives to race another season. Mr. Natoli said,” “You’ve got to try to be as good a neighbor as you can when you’re making all that noise on a Sunday afternoon,” he said. “It’s the real deal,” he said.

Those improvements were evident to the racers who had left, who remembered the track from decades ago, but said he was “pleasantly surprised” when he visited under the Leadership of Mike Natoli more recently got that Family friendly welcoming feel back again.

Safety and rules are sanctioned by NHRA and the Park like look is Mr. Natoli’s own feel. Many neighbors stop by to keep an eye on the track while Mr. Natoli is managing his fleet and teaching the upcoming Auto & Truck Technicians. Mr. Natoli has hired a Safety Engineer to keep Safety at the track Paramount. Mr.Natoli said ,” that the good Lord gave Sunshine every day we could race and not one incident. It doesn’t get better than that. Mr. Natoli would especially like to Thank Mr. Mike Trotta and his family, Mr. Paul Wilhelm and his family, Mike & Johhny Scano, Don & Lorraine Schultz, and especially my Mom who without her inspiration and words this journey would not have happened. Mrs. Natoli asked Mike when he was a young man beginning his racing, how much do you get paid for racing your car. Young Mike told his Mother we don’t get paid we have to pay to race. Well she said do you get something if you win, young Mike told her yes a Trophy and some money, she asked do people come to watch you race, and Mike told her yes they do. She asked do they pay to watch and Mike replied yes they pay too. Mrs. Natoli paused and said who owns the Track. God Bless you MOM.

Send a Message to The Mountain

These Fine Companies Support Your Track. Please Patronoize Them.